9+ of the Prettiest U.S. National Parks for Your Wedding 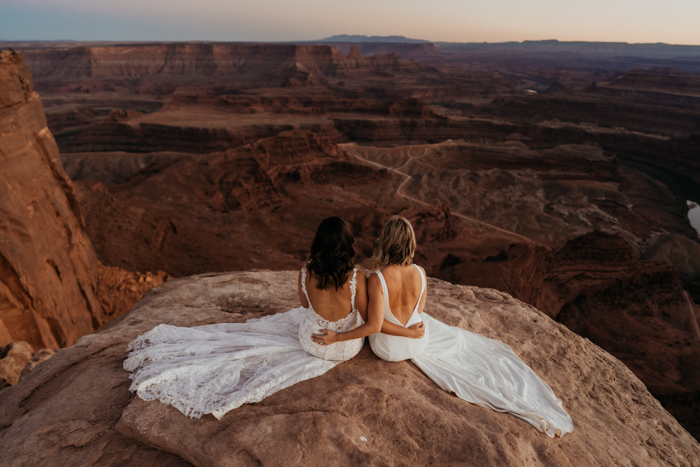 Searching for a traditional wedding venue just doesn’t work for some couples. And that’s okay. Some couples are in search of venues with an epic backdrop, or they’re interested in making their guests hike with them before exchanging their vows. Whatever the reason, planning a national park wedding is the perfect way to showcase your love to each other and for the Earth.

If traditional wedding venues have been lacking the epic factor you’re looking for, keep scrolling to get inspired by these incredible US national parks.

If you’re lucky, you might spot moose or even whales while exchanging your “I do’s!” 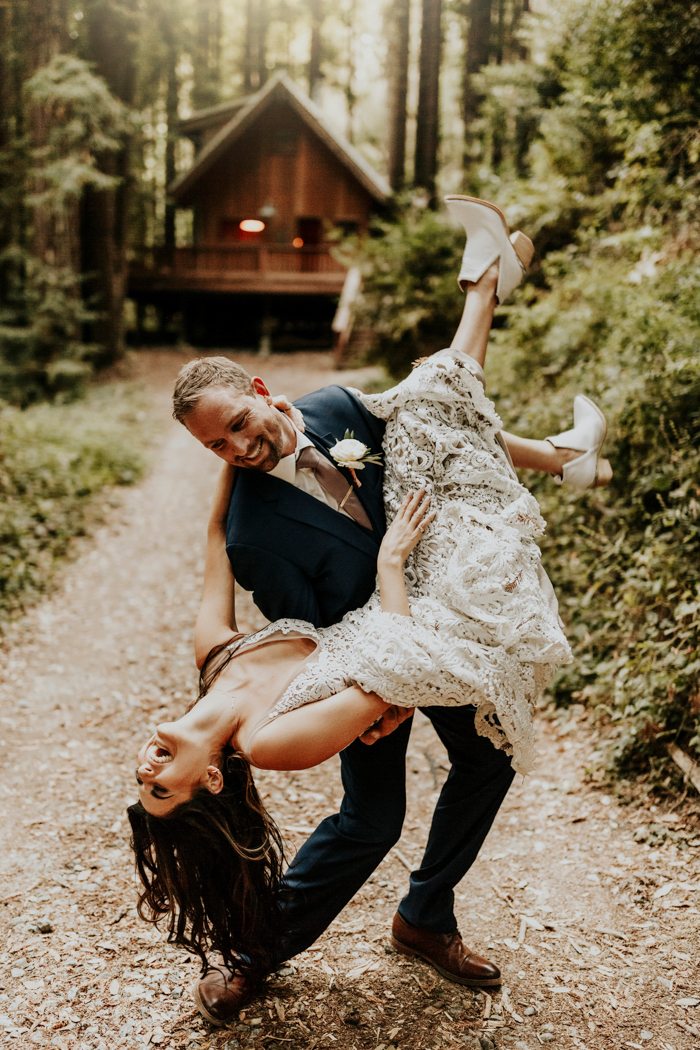 This park is best known for its, well, sandstone arches. Although the park is home to more than 2,000 delicate arches, the most recognizable is Delicate Arch. Expect perfectly blue skies, incredible sunsets, and plenty of sandstone. 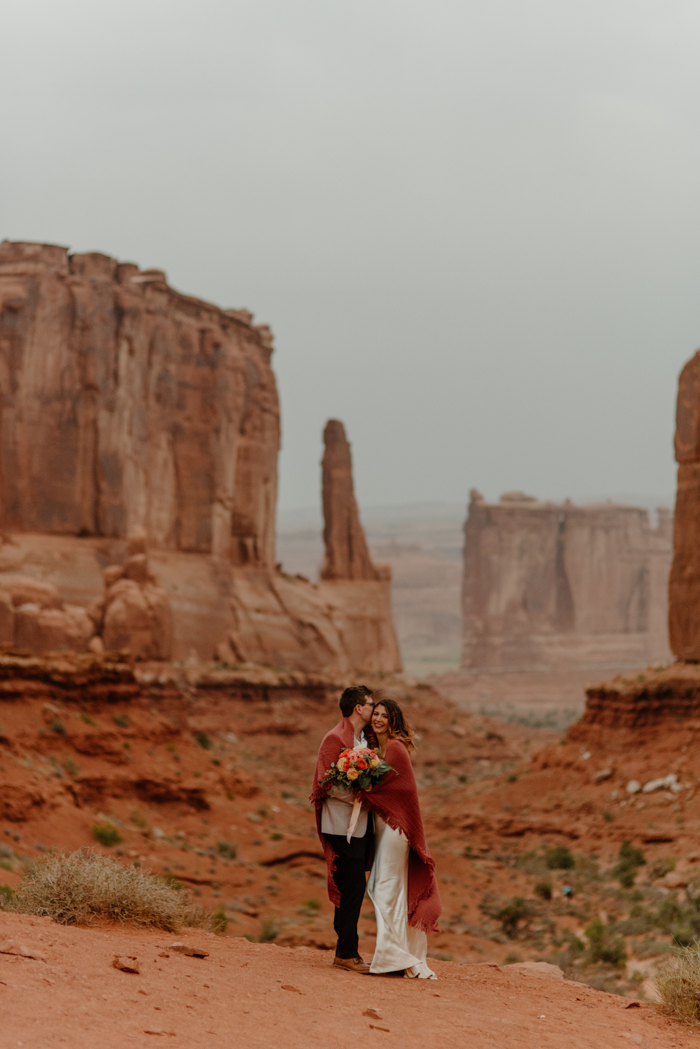 Surprisingly enough, the park isn’t closed during the winter! Snow will cover the park, daylight disappears early, and temperatures drop significantly. You can also expect to catch a glimpse of the Northern Lights, scientifically known as Aurora Borealis.

Calling all hikers, this one’s for you. Glacier National Park boasts more than 700 miles of hiking trails including a route to the picturesque Hidden Lake. This park runs along the border of the United States and Canada, so be sure to bring your passport to pop back and forth after the ceremony. 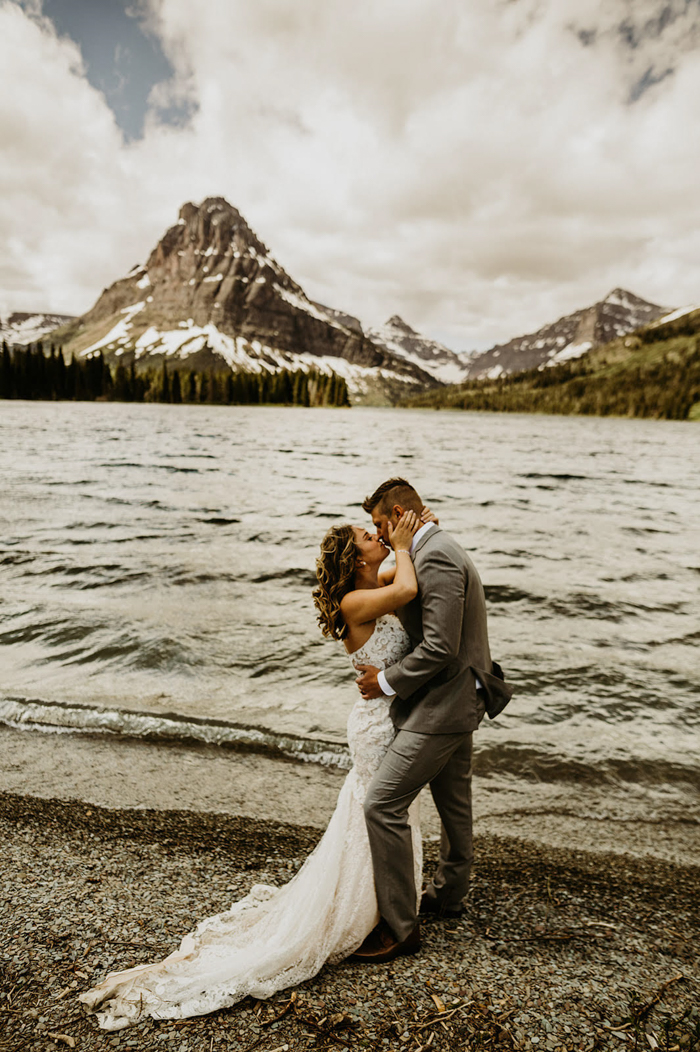 Because this park is further north in the United States, check the weather before you book your adventure elopement. It snows as early as June in this national park and you’ll want to be sure you’re dressed appropriately.

Holding strong to its place on the Natural Wonders of the World list, the Grand Canyon is truly a sight to see. Its layered bands of red rock showcase millions of years of geologic history. Although the hikes can be intense—and treacherous—there are also a handful of accessible viewpoints. Mather Point, Yavapai Observation Station, Lookout Studio, and Desert View Watchtower are only a few.

Lipan Point is especially popular at sunrise and sunset for a reason. The cliff offers an unmatched view as your ceremony backdrop. 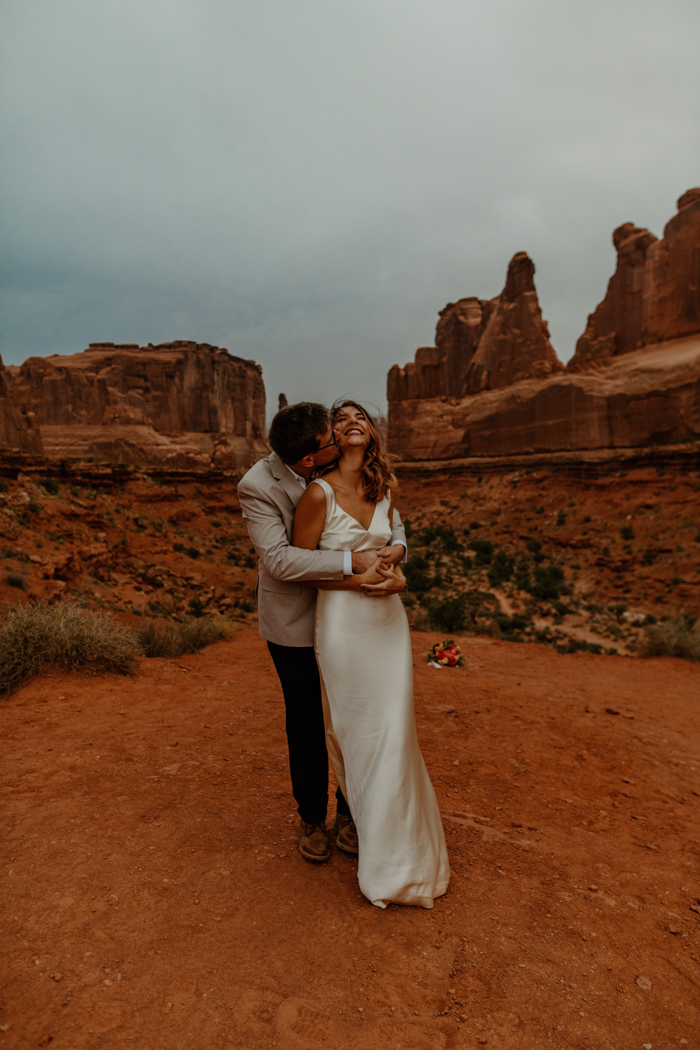 When you think of national parks, the image in your mind is probably something like Grand Teton. With an incredible view of the snow capped mountains, lush green valleys, and calm river waters, it’s picturesque. Enjoy a truly remote wedding experience in this national park.

For some couples, romance with a touch of danger sends their hearts soaring. If the idea of saying your “I do’s” next to active volcanos is your cup of tea, we’d never dream of stopping you. Eloping in this truly unique setting offers ocean views, lush greenery, and—of course—volcanoes. We can’t wait to see your photos. 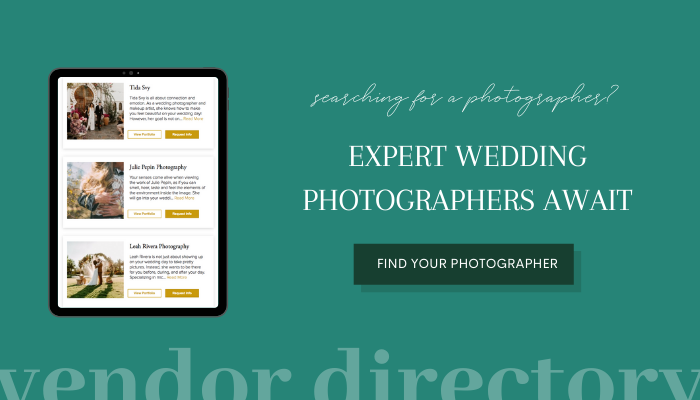 There really isn’t anywhere on Earth quite like Joshua Tree National Park. This desert park features unique rock formations and distinct plantlife. A road runs through the entire park, so accessing the trails you’re most interested in is quite easy. 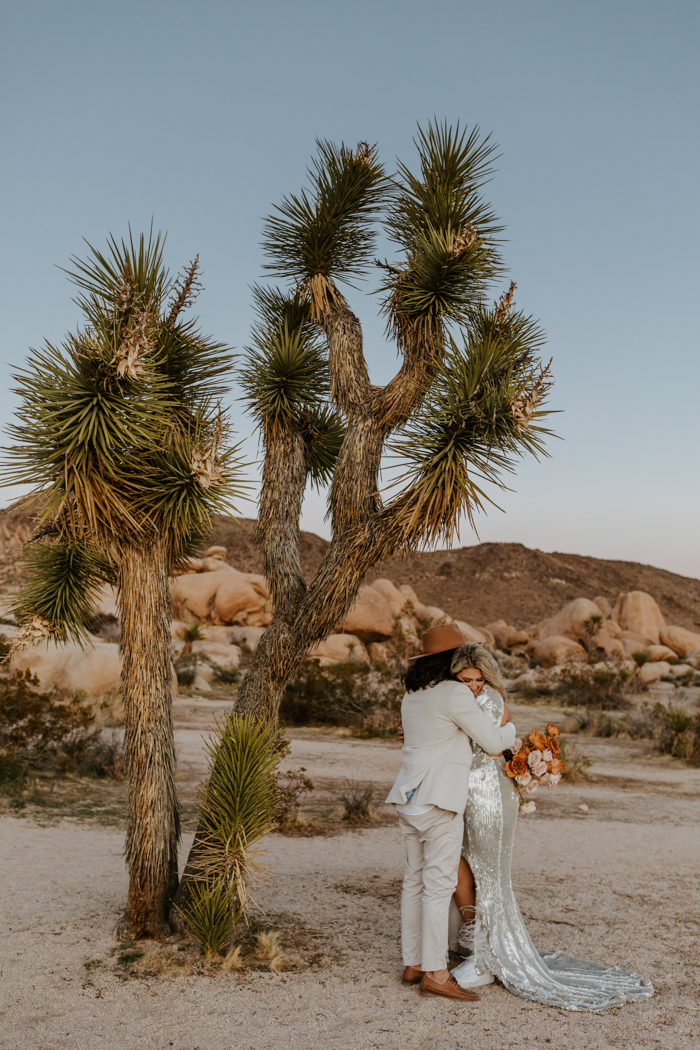 Because the terrain is fairly accessible, dress shoes and low heel wedding shoes aren’t out of the question in this location.

Mount Rainier National Park is the epitome of the Pacific Northwest vibes. The moody, foggy mountain has a variety of scenery. From lakes to greenery to mountain peaks, every location is perfect for your wedding adventure! 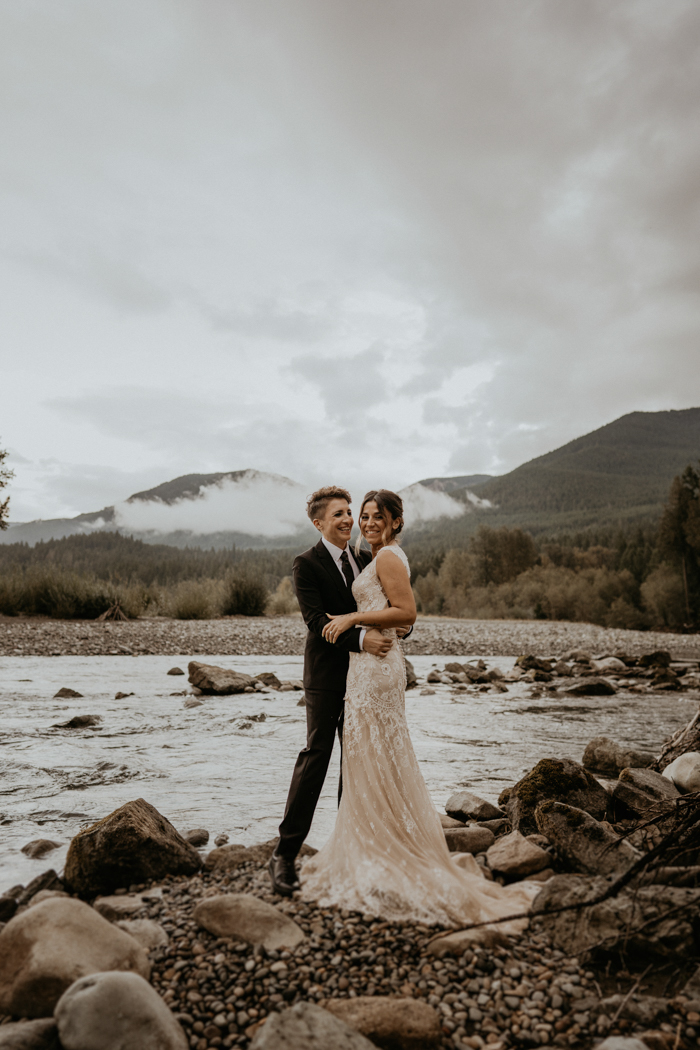 Aren’t sure what kind of nature you want to get married in? Olympic National Park is perfect thanks to its mountain views, lush rainforests, backpacking trails, and proximity to the Pacific coast. The park spans across nearly one million acres, so there’s plenty of room for any kind of national park wedding. 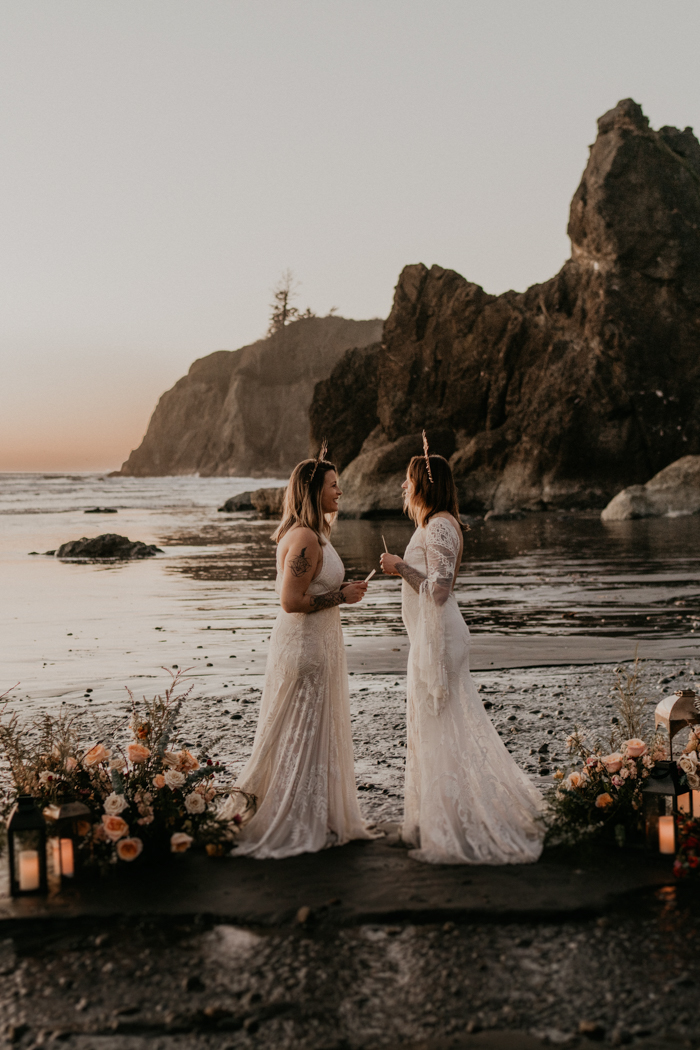 This national park is much more than tall trees. Yes, the tallest trees on Earth are here, but there are also prairies, oak woodlands, rivers, and even the coastline. Take a scenic drive, take in the splendid flora and fauna, and then say your “I do’s” under a canopy of towering trees. 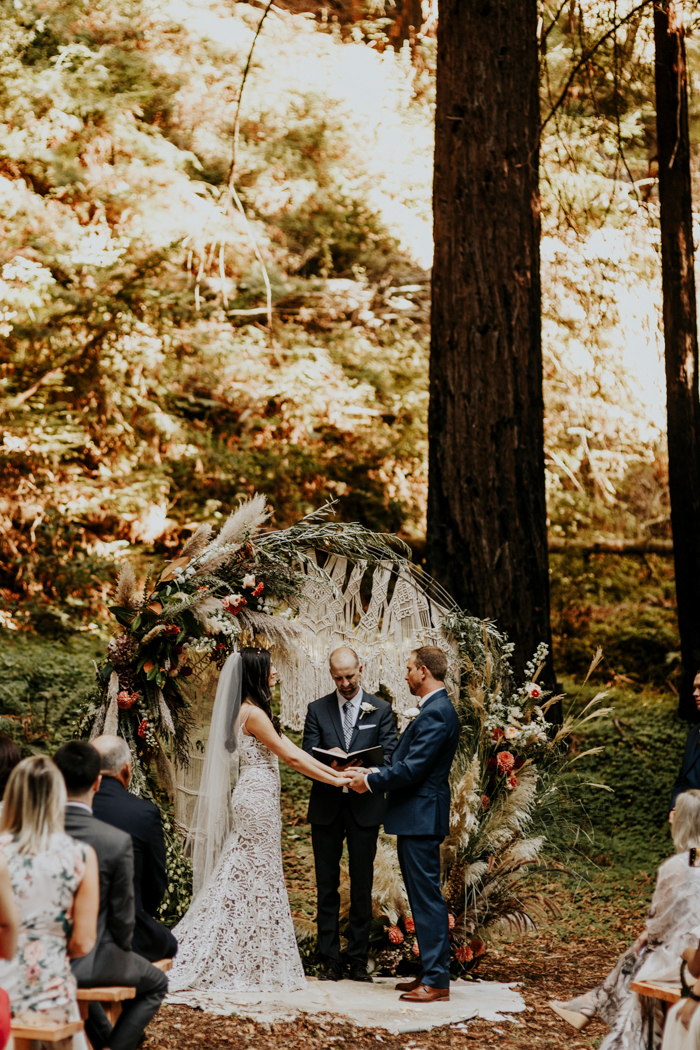 Protected mountains, thick evergreen forests, and an alpine tundra all call Rocky Mountain National Park home. The summer and fall seasons bring large crowds to the park, so visiting in November through April is the best time of year to avoid onlookers to your wedding.

Making a reservation isn’t required. But since this park is so popular it’s the only way to guarantee your spot. 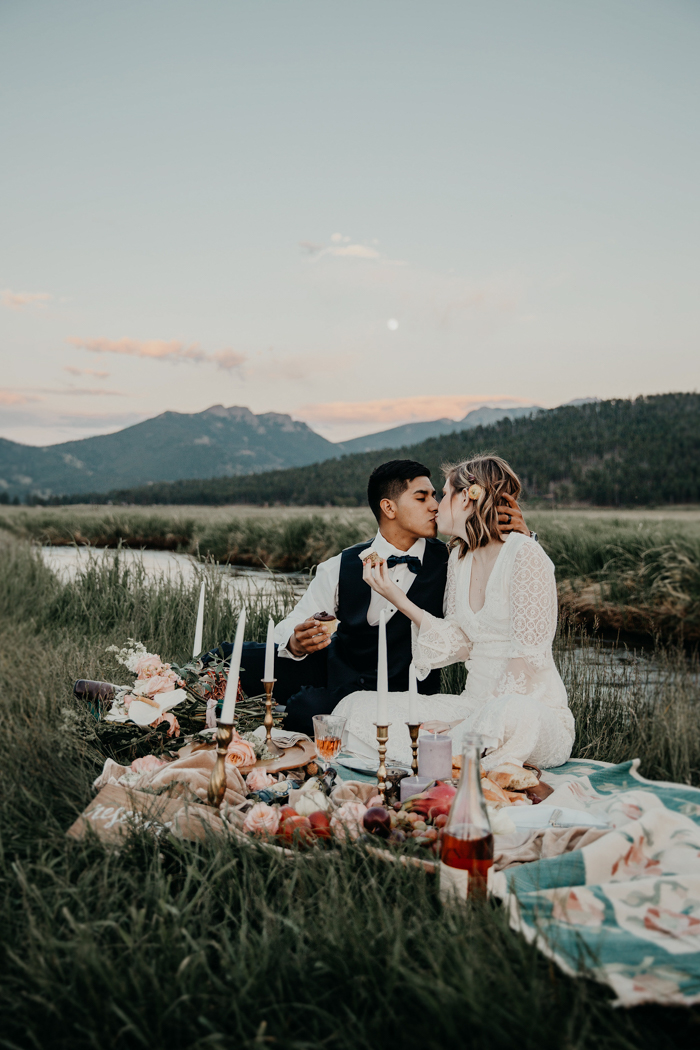 Also known as The Land of Giants, Sequoia and Kings Canyon national parks feature a dramatic landscape with huge mountains, canyons, caverns, foothills. The most famous giant sequoia tree, General Sherman, calls this national park home and is estimated to be more than 2,300 years old. Imagine nuptials with an ancient tree as your witness—talk about a unique ceremony backdrop. 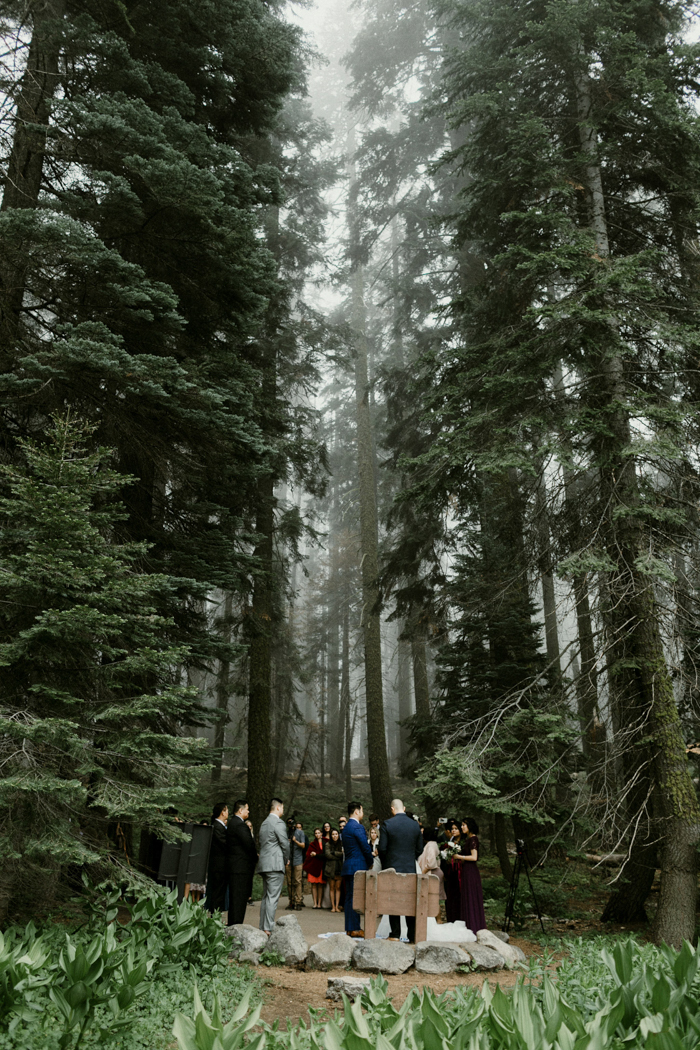 image by Katch Silva | see more of this wedding here

The Skyline Drive, wetlands, waterfalls, and the Appalachian Trail make up this beautiful national park. This seriously romantic location is beautiful all year long. But it’s especially beautiful in the fall when 200,000 acres of trees are changing colors.

This national park is much more than just a collection of beautiful beaches, though they are part of the allure of this wedding location. These Caribbean islands are surrounded by coral reefs, woodlands, and crystal clear waters. 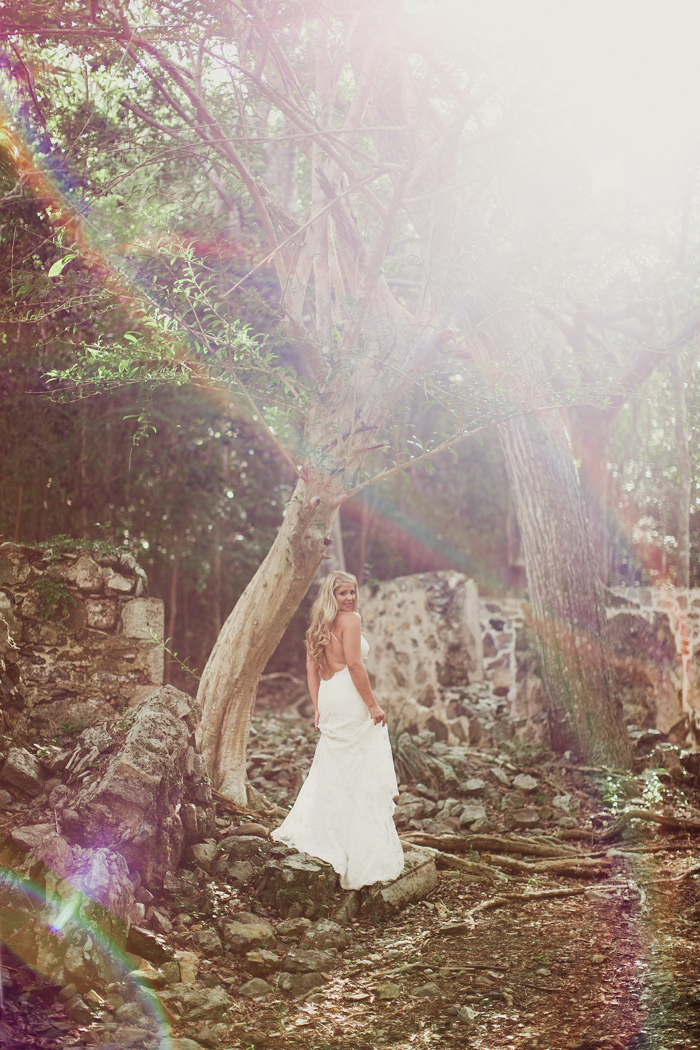 New Mexico is also called The Land of Enchantment, and this national park is no exception. The white sands stretch on for 275 square miles. There’s nothing quite like this place on Earth. The contrast of bright blue skies against the white sands will make for unforgettable images from your day. 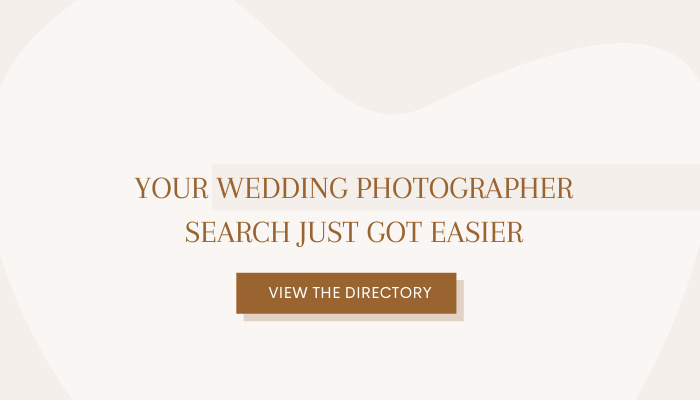 Yellowstone was the first United States national park. It’s most well known for Old Faithful Geyser and the Grand Prismatic Spring. The park works well for couples looking to find a beautiful location without hiking or climbing to reach it.

Sunsets in Yosemite are some of the most beautiful ones on Earth. After exchanging your vows, we recommend a post-wedding hike up the incredible rock formations with your photographer to bask in the incredible views. 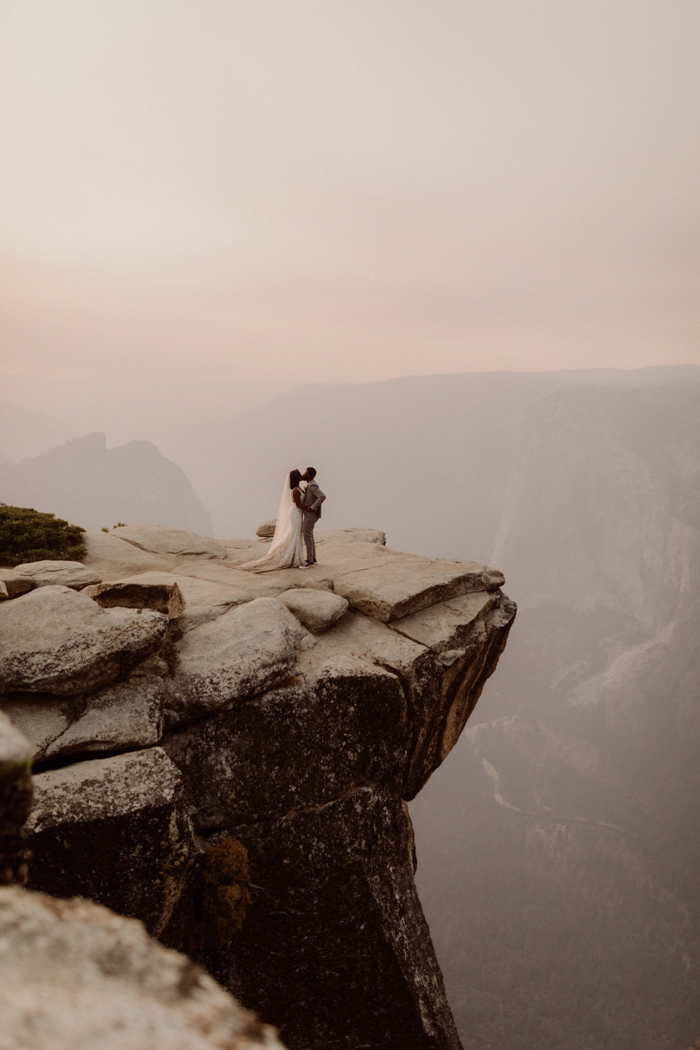 image by Cedar & Pines | see more of this wedding here

If you’re planning on hiking, splurge on a second wedding outfit and make it a jumpsuit.

Zion National Park brings natural sandstone colors to your wedding with a jaw-dropping backdrop of cream, pink, and red cliffs. Somehow, this park manages to become even more spectacular during sunset.

Check out more Zion National Park inspiration in this styled shoot and this boho flair wedding. 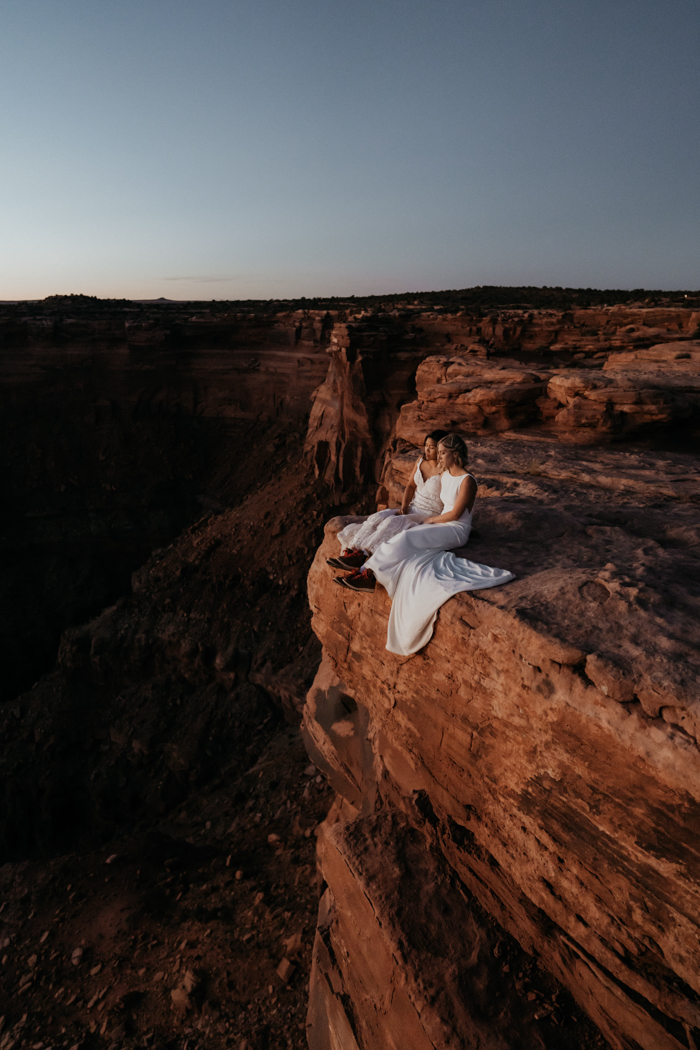 Outdoor nuptials are always some of our favorites. The natural beauty of these places always shines when you’re working with incredible wedding photographers. Once you’ve settled on a national park venue, be sure to reach out to an expert wedding photographer to capture the best day of your life. 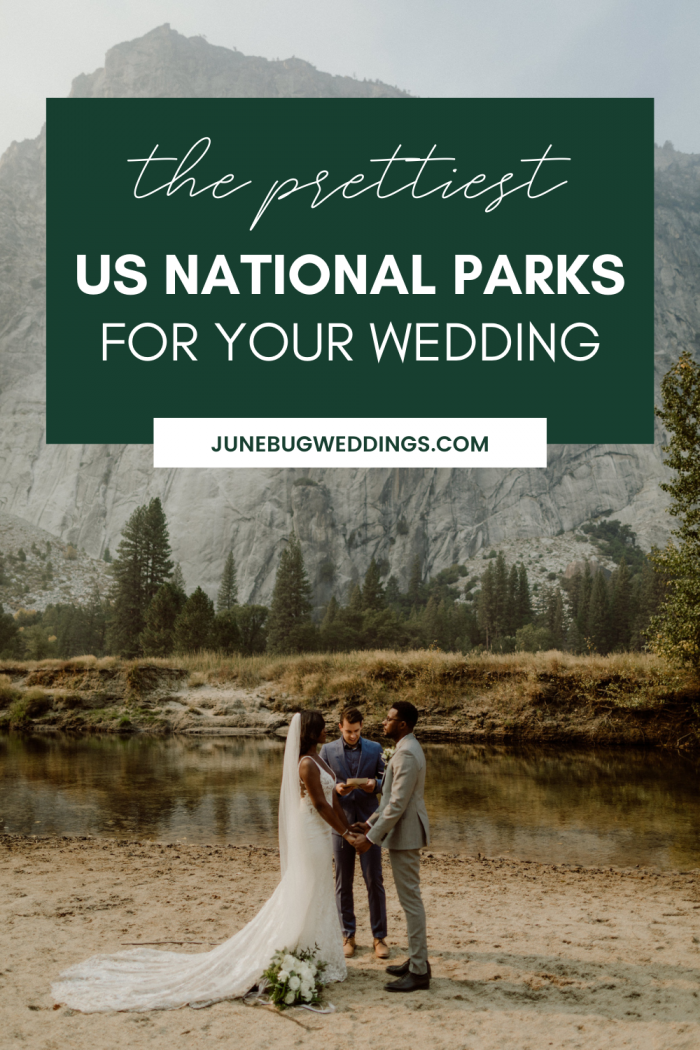 image by Cedar & Pines | see more of this wedding here